“To date, our project received the best reviews for impact and sustainability in the whole of Africa, thanks to Alexia’s diligent mentorship.”– Rehmah Kasule, Goldman Sachs/Fortune Global Women Leaders Award Winner 2014; Founder – CEDA-Uganda.org”

“This weekend I had the opportunity to attend the 10 TRAITSScience-Based Leadership Training by Alexia Parks. It was a wonderful training and one of the pieces is the keynote by Alexia on ‘Darwin’s Remarkable Women.’ It’s a fascinating talk on the particular traits of the female brain and how those traits have evolved over time and are now essential leadership skills for moving work forward in today’s world.”- Andréa Giron, Manager of Audience Insights, Denver Museum of Nature & Science

•“Alexia Parks is leading new thinking in the area of social change and the role of women in our modern world.”-Margaret Manning, Founder of Boomerly, and the SixtyandMe online.”“Alexia is a visionary pioneer.”- Rajeev Rawat, Co-Founder and CEO BI Results LLC”

“I so appreciate the work you do and pray that it pays off for all of us sooner rather than later.”- Claudine Schneider, former Congresswoman from Rhode Island, Co-Founded the Competitiveness Caucus in the U.S. Congress. Gave a briefing to Margaret Thatcher. Co-hosted the CNN coverage of the Senate Chief Justice Confirmation hearings on Clarence Thomas. Participated with Prince Charles in a BBC film on Climate Change.

“I am on the steering committee for our Women in Leadership group at a leading Life Science and High Technology company and I appreciate your work.”Lori Cordova-Oistad

“Alexia presents an interesting argument for female leadership, referencing biological evolution, cultural anthropology, and more.”- Sheryl Winarick, Immigration Attorney whose clients include TED (and TEDsters across the globe), Oxfam… individuals and “families who risk leaving everything familiar behind with Hope and Faith in a bright future.”

“Provocative! 5-STARS” “In today’s world…, women are superior in social bonding, fostering diversity, expressing emotions and having empathy for the plights of others.”- Laurence Kirshbaum, former Vice-President and head of the NY Publishing Office of Amazon.com”“

“Thank you Alexia for holding the space for all of us to come into our power in a much higher way together.”- Maestra Antonia Joy Wilson, Artistic Director, CEO & Conductor of Global Arts Center: Multimedia Symphony.

“I am excited for your work and look forward to supporting it as we all move forward.” – Seleyn DeYarus, Executive Director at FearLess Revolution

“Thanks Alexia — These are the conversations we need to be having! Please don’t hesitate to ask if there is anything [we] can do to support your efforts!”- Michelle Meyer, Founder, GirlAuthentic

“Sometimes you meet a individual that sparkles. Alexia is just one such person, shining her light and wisdom wherever she goes! Her wisdom and brilliance is contagious. Encountering Alexia, and having the great honor of spending time with her, is a life-changing event.”- Therese Hartmann, President, World Family Foundation, Vice President, Ojai Education Foundation (OEF).

ALEXIA PARKS – Now CEO of ZIPHomeChef.com and Board Chair ZIPHEALTH.org and 10TRAITS.org, Keynote Speaker. Seniorpreneur, Inventor, award winning entrepreneur and United Nations Mentor. As a United Nations Mentor, Alexia Parks mentored the young leader who became the #1 Goldman Sachs/Fortune Most Powerful Woman in the World Award Winner in 2014.  Alexia Parks is also the inventor of the patent-pending Alexia Parks Gender Equality Scale™ and power tools – used with this #1 award winner – that form the basis of 10TRAITS rapid training system. She formerly wrote for the national desk of The Washington Post. In 1995, Alexia Parks was named one of Newsweek’s “50 Who Matter Most on the NET” for her launch of one of the first electronic democracy websites on the Internet. Wikipedia / Alexia Parks CV 2018.

Alexia Parks patent-pending invention and leadership development programs are intuitive. They are for everyone. Science-based, they are based on 40-years worth of research across a dozen fields of science, including neurobiology, evolutionary psychology, and both cultural and physical anthropology.  10TRAITS complete solution for corporations and employees offers the ONLY patent-pending power tools in the world that leverage the dynamic synergy of natural gender trait differences between men and women to help leaders make better decisions.

DR. JOEL “RAUCH” (Rauchwerger PhD) – Co-Founder. What makes Dr. Rauch unique in his field is his vast knowledge of science, medicine, brain function, nutrition, biochemistry and psychology, as well as the fundamentals of whole body health, the micro biome, a ketogenic lifestyle, human psychology, stress management, and biofeedback. Dr. Joel has had a life long interest in work/life balance and how to strengthen the Immune System to prevent, reduce, or reverse most disease. His expertise is in preventative medicine and whole body health and nutrition. Dr. Joel was on the faculty at Baylor College of Medicine in Houston, TX, and worked with the world famous cardiologist and heart surgeon Dr. Michael DeBakey.  He trained many of today’s doctors and nurses. At Baylor College of Medicine, he was also part of the team of medical doctors who worked on the case of the “Baby in the Bubble,” and worked in the lab that discovered the role of the Immune System. Dr Joel’s first book in 1977 linked stress and cancer. The working title: The Survival Response: The Type C Personality.

MEGAN EDWARDS RN + COO. Megan Edwards became a Commissioned Officer in the Canadian Military at age 18; eventually becoming a Captain. She holds a degree in Interpersonal / Organizational Communications and English and is a Registered Nurse (RN). Megan’s expertise also provides support for private sector corporations and public sector institutions with developing quality control and change management programs. She combines high level communication and healthcare skills with operational management and the flexible mindset of an entrepreneur. Megan formerly owned and operated a franchise within a globally recognized health and fitness franchise corporation. She is now on the ZIPHEALTH.org team and works with ZIPHomeChef.com

ROBERT L. BERGMAN – Consulting Services. Robert “Bob” Bergman is an engineer, a futurist, and whole systems decision-making expert. He graduated from MIT and worked on decision-making for INTEL for 30-years. He logged more than 2-Million miles and managed 5-decision-making meetings a day around the world. Robert Bergman took charge of the patent process for the Alexia Parks Gender Equality Scale and also incorporated it in the enterprise Analytical Hierarchical Process (AHP) – created to address the issue of improved decision making in FORTUNE 50 companies. Both are patent-pending. The AHP process can now leverage the dynamic synergy of natural gender trait differences between men and women to help leaders make better decisions. 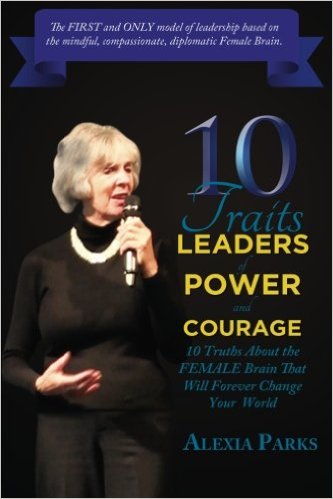